A SHORT HISTORY OF WADORYU 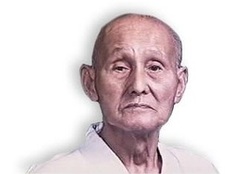 Otsuka Hironori Meijin founder of Wadoryu
​Otsuka Hironori was born on June 1st 1892 in the Ibaraki prefecture. His mother’s uncle, Chojiro Ebashi was a Samurai warrior who enthralled the young Otsuka with his exciting tales, and then began teaching him Ju-Jitsu at the age of six.  Hironori later began to train in Yoshin Shindo Ryu Ju-Jitsu under Master Nakayama Shizaburo, when aged thirteen.
This school differed from the others of the time as it emphasised striking & kicking as well as the usual throwing & control techniques. During his university years he studied other styles of Ju-Jitsu and also befriended Ueshiba Morihei the founder of Aikido. On Otsuka’s 30th birthday he received the Menkyo Kaiden, the certificate of proficiency from Master Nakayama, effectively making him the youngest ever to receive this award.

​In July 1922 Otsuka heard of a new Martial art, Tode, to be demonstrated in Tokyo before the Emperor. The demonstration was performed by an Okinawan school teacher and poet Gichin Funakoshi. Otsuka was impressed and approached him, asking to be his student. This was to be the beginning of a long and fruitful relationship. Otsuka trained virtually every day with Funakoshi, quickly learning the techniques and Kata taught to him. Gradually Karate began to spread in Japan, with Otsuka mainly responsible for organising its growth.

It was at this time that he began to seek more answers, especially within the Kata so he learned from the great Okinawan masters Mabuni Kenwa, the founder of Shito Ryu and Motobu Choki, a renowned exponent of Kumite, who is thought to be responsible for  Otsuka’s development of the Nai Hanchi kata.

In 1925 Otsuka resigned from his position as a banker and began studying bone setting. Two years later he set up a clinic specialising in martial arts injuries, mainly caused due to the popularity of Judo at that time. By 1929 he had established a Dojo of his own and found himself drifting away from the teachings of his master, having developed a series of Yakosoku gumite based upon his knowledge of Ju-Jitsu.

A parting of the ways was inevitable, however their friendship continued, with Funakoshi’s son developing his father’s teachings into what is now modern Shotokan karate.

Otsuka went on to develop his study of Jiyu kumite, and formulated the first set of rules for competition which was a pivotal happening for Karate.
1934 was a very important year for Otsuka, apart from the birth of his son Jiro he opened his own school called the Dai Nippon Karate Shinko Bu Kai, teaching his new systems of Wado Ryu Karate Jutsu and Wado Ryu Ju-Jutsu Kempo merging Okinawan Karate and traditional Japanese Ju-Jitsu, making this the first style of Karate to be created in the form of Japanese Budo.
In 1939 Otsuka registered the name of his style as Wado Ryu with the Dai Nippon Butokukai in Kyoto, alongside the other styles of Shotokan, Goju-Ryu and Shito-Ryu. Later that year Otsuka was also honoured by the Butokukai with the title Renshi, and in 1942 with the title Kyoshi.

The advent of the second World War affected Karate greatly, and during the American occupation of Japan (1945-1952) the practice of Karate and other Martial arts was banned. However this was circumvented by calling Karate “Japanese Boxing” therefore deeming it the teaching of a sport. 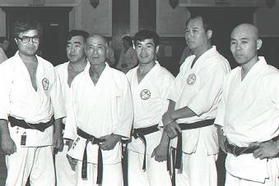 L-R Shiomitsu, Tanabe, T. Suzuki, Sakagami, S. Suzuki & Sugasawa.
The 1960’s saw the spread of Karate to the western world. In 1964 Suzuki Tatsuo arrived in Britain, followed by many other Sensei, including Shiomitsu Masafumi and Sakagami Kuniaki.  Wado established itself as a major style in Britain and Europe.

In 1966 Otsuka was the recipient of the Soko Asahi award for dedication to Karate, and in 1972 awarded the title Meijin by the Kokusai Budo In, making him the first excellent Martial Artist of 10th Dan in Karate Do.
Suzuki’s United Kingdom Karate-Do Federation became one of the country’s major Karate organisations, producing many fine Dan grades and champions. Suzuki Sensei arranged visits to Europe and Britain by Otsuka Meijin who conducted many seminars across the country, the last of which was in 1976.

Jiro Otsuka
Unfortunately with his health failing Master Otsuka abdicated his position of Grand Master of Wado Ryu and appointed his son Jiro as his successor in November 1981.
Sadly on January 29th 1982 Master Hironori Otsuka passed away. He practiced up until his death, making him the oldest practising Karateka of that time.
After his death Jiro changed his name to Hironori Otsuka the second, and upon his passing in 2015 his son Kazutaka succeeded as the head of Wadoryu.


Master Otsuka’s theory of Wado is based on the teaching of: “TEN-CHI-JIN RI-DO”. (Heaven-Earth-Man principal way).
A harmonious union between all things. Otsuka’s belief was that all Martial Arts are intended to bring together people of all races and creed to live in peaceful co-existence with themselves and the world, and that only rigorous persistent training to discipline the mind, body and spirit will take the person along the path to achieving that belief.

Below is an adaptation from an open letter written by Ohtsuka Hironori (10th Dan) Meijin to all Wadoryu students sent out two-years prior to his death and that explains the origins of Wado-ryu.

"At the age of five years old, I was in very poor health. It was then that I began my training in Ju-jutsu at the school of my uncle, Sensei Chojiro-Ebashi, the official martial arts instructor of the Tsuchiura Clan. Since this time I have trained continuously until my present age of eighty-eight years. For this, I can heartily thank the traditional Samurai education, which was both gentle and strict. I also thank and pray for my dear mother without whom I could never have succeeded in my deepest aims; I thank her sincerely for always being near.
On my thirtieth birthday, Master Nakayama, the third Grand Master of Shinto Yoshin-ryu Ju-jutsu, allowed me to learn the deepest and most secret doctrines of our school. It was then that I succeeded him as the fourth Grand Master.
Karate was becoming increasingly popular around this time, and I began to study its techniques from several eminent Okinawan Masters who had begun to teach in Tokyo. It occurred to me that there were many fine attributes in the Okinawan systems, and so decided to blend these with the finest elements of Shinto Yoshin-ryu Ju-jutsu to create a genuine and original Japanese martial art. Through this process I developed Kumite, Gyaku-nage, I-dori, Tachi-iai, Tanken-dori, and Shinken-Shirai-dori.
Every year, for purposes of promoting the Japanese Martial Arts, the Butokuden in Kyoto held a national festival. In 1938, the festival focused on the originators of each martial art, however, no originator of Japanese Karate had been identified. I named the originator of the first true Japanese style of Karate-do as Shiro-Yoshitoki-Akiyama (the founder of Shinto Yoshin-ryu Jujitsu) and named this new style of Karate-do, 'Wado-ryu' meaning: 'Japanese-way school' or also 'Peaceful-way school' since the kanji lettering for 'Wa' can mean both.
The fundamental meaning and original aims of martial arts is the promotion of peace. To bring peace to society and to guard against its loss so that human beings can enjoy a happy life. We must strive for peace in a world where it is increasingly difficult to achieve. We must not simply rely on God's mercy to achieve it but must strive as individuals, with all our will, to attain it. Immense spiritual and physical power is required so we will not surrender to the difficulties and barriers which lie before us on this journey. The hard training in martial arts aims to foster this dauntless, indefatigable strength which is why the beauty of martial arts training is beyond the vicissitudes of mundane affairs."